Greystone.Net established the John A. Eudes Vision & Excellence Award, in memory of one of the Greystone founders, John Eudes.

In addition to building a successful healthcare strategy company, he founded the Healthcare Internet Conference (now called HCIC) in 1996, which has made a lasting and significant contribution to the healthcare internet field. And more importantly, he exuded excellence and was an inspirational visionary who all that met him. 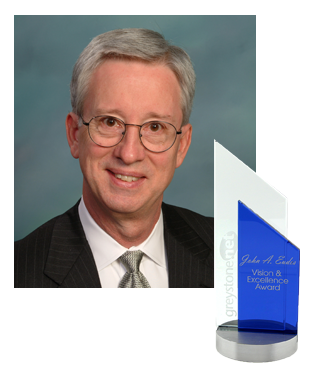 The award honors individuals who embody John’s ideals for excellence. He strongly believed in -- and more importantly acted upon -- the idea that excellence can only be obtained if one:

Candidate submissions are evaluated by an independent group who reviews each candidate's qualifications including their accomplishments, dedication, influence and contributions to the healthcare field. The recipient is announced at the Healthcare Internet Conference each year.